Since its launch in 2012, the annual Decibel Magazine Tour’s ambitious curation has unified artists from around the extreme universe who would otherwise never have the opportunity to tour together. The lineup for the 2019 Decibel Magazine Tour once again breaks new ground, as legendary death metallers Cannibal Corpse and Morbid Angel join forces for the first time ever in America to co-headline the winter tour. Rising Bay Area brutalizers Necrot and space-obsessed Denver death dealers Blood Incantation round out this once-in-a-lifetime bill. New York death metal icons Immolation will join the final week of the tour as main support to Morbid Angel, as Cannibal Corpse exit the tour after the New York City date.

“We’re really looking forward to our second appearance on the Decibel Tour; they always put together a killer line up and this time is no exception,” says Cannibal Corpse bassist Alex Webster. “We’re particularly excited to be hitting the road with our friends Morbid Angel. In fact, this will be the first time we’ve toured together in the USA.”

“Everyone here in the Morbid Angel camp are stoked to do this tour with Cannibal Corpse,” says Morbid Angel‘s bassist/vocalist Steve Tucker. “To celebrate, Morbid Angel will be performing a mean-ass set of songs that will cover the entirety of our years of kicking ass.”

“We will be adding some of the older songs back to our set,” assures Morbid Angel founder Trey Azagthoth. “See you all there.”

Presented by Metal Blade Records, and sponsored by Silver Lining Music, Tankcrimes, Dark Descent Records and Nuclear Blast America, the Decibel Magazine Tour is once again poised to be the heavy metal tour of the winter.

Tickets for the 2019 Decibel Magazine Tour go on sale Friday, November 16 at 10 AM local time and can be found at decibelmagazine.com/tour. All dates and venues are below. 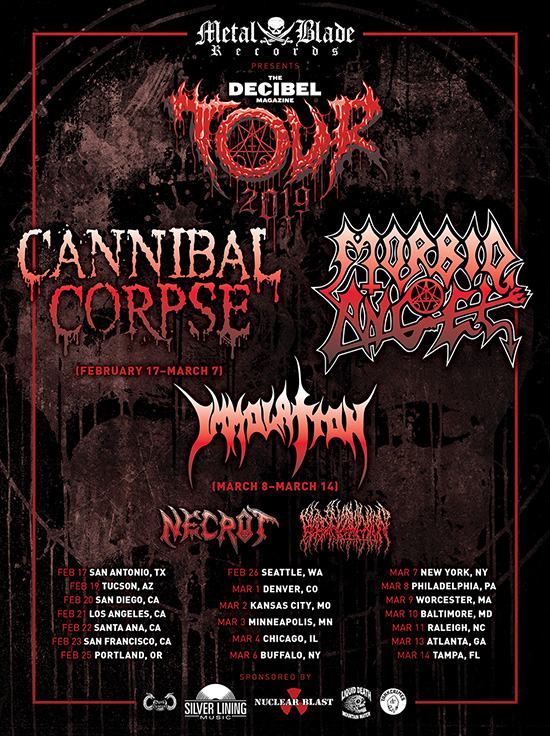 Cannibal Corpse will be touring in support of their latest album, Red Before Black. Many words come to mind when you hear the name Cannibal Corpse, but one truly defines the soon-to-be thirty-year death metal veterans: Unstoppable. Produced by Erik Rutan (Hate Eternal, Goatwhore), Red Before Black serves to not only reiterate this but to once more raise the stakes, making it very clear who sets the standard when it comes to always compelling music that is equally brutal and complex. Moreover, the band have pushed themselves again, ensuring that it stands out from their catalog. “Throughout our career we’ve tried to improve the precision of both our musical execution and our album production, while still maintaining full-on aggression. ‘Red Before Black‘ continues in that direction, but might go even further on the aggressive side of things. It’s definitely precise, but it has a rawness to it that goes beyond anything we’ve done recently,”asserts bassist Alex Webster. “We really worked super hard crafting these songs, practicing them, and getting them where we wanted to be more so than on any of our previous albums,” adds drummer Paul Mazurkiewicz. “And as Alex said, musically I think it’s the most raw sound we’ve had – and at the same time I think it’s our most focused, tightest and catchiest record.”

Laid Back Townies to release second album in December