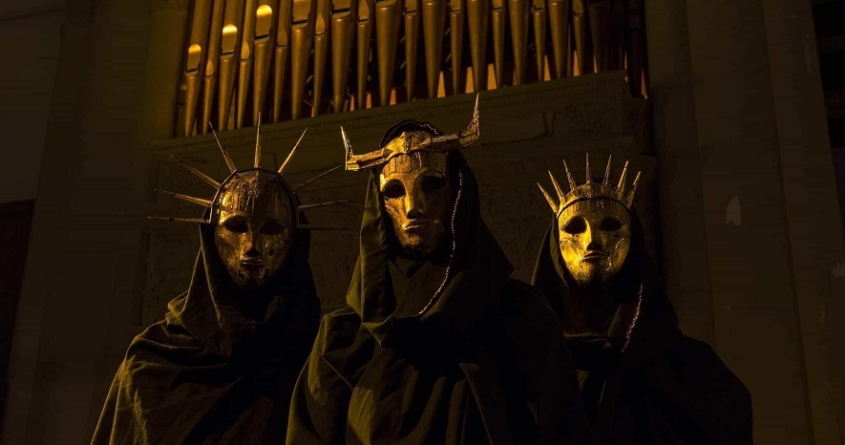 A GLIMPSE INTO THE GROTESQUELY BEAUTIFUL WORLD OF IMPERIAL TRIUMPHANT: “Our outfits are the evolution of the band’s ideas, material, and points of interest. Focusing more on the esoteric, they reflect the grand design aesthetic of ancient Egypt, Art Deco, etc.. Surely they will keep evolving just as New York City is constantly transforming.”

Croatia isn’t exactly a super popular destination for most metal bands so imagine my surprise when I saw Imperial Triumphant’s first-ever European Tour announcement and saw Zagreb on the list. For the uninitiated, Imperial Triumphant play a unique blend of avant-garde, jazz and black/death metal but unlike many other acts, they utilize jazz to a great extent and very successfully might I add. This is especially true when it comes to their third record Vile Luxury that came out last year and took many (including yours truly) by storm. Since the trio comes from New York, they use Langian and Art Deco aesthetic as a vehicle to critize their beloved metropolis. I would also like to give a shout out to Mord’A’Stigmata who are their supporting act and while genre-related, sound completely different. The Poles use a more electronic and psychedelic approach and I definitely recommend their newest record Dreams Of Quiet Places which came out three weeks ago.

So with out of the way, we can start the interview but before I start asking questions, I wish to thank you for making time to do this, I appreciate it very much and personally can’t wait for Sunday.

Now let’s get into it!

Since this is your first-ever European tour I’m interested in how are you liking Europe so far? Satisfied with the venues, cities, reception? Also, could you describe what was it like to be the final band performing on Roadburn’s Het Patronaat? Couldn’t make it there unfortunately so I am really curious.

Imperial Triumphant: The reception has been overwhelming. Suppose our visit was overdue. The crowds have been phenomenal and passionate about Imperial. Closing the Het Patronaat was a glorious honor, one not easily forgotten.

Touring is hard work so I wonder if you guys listen to anything while in your trusty tour bus? Also, since I noticed a lot of Nintendo Switches in metal bands, I wonder are any of you video-game nerds or do you watch movies, read books or anything of the sort?

Imperial Triumphant: We just listen to music. Usually a lot of jazz, classical or rock but on this run the Polish tour mates Mord’A’Stigmata have been showing us a lot of metal from their county.

Many avant-garde metal bands ironically sound similar but you guys stand out due to your unique approach when combining jazz and extreme metal. This is especially true when it comes to Vile Luxury (still can’t get over how cool that piano solo in “Cosmopolis” is) so I want to know who are your favourite jazz musicians and albums nowadays?

Imperial Triumphant: Miles Davis, ‘Nefertiti’, Bill Evans, ‘Portrait In Jazz’, Duke Ellington, ‘Money Jungle’, Wayne Shorter, ‘Speak No Evil’, Tony Williams, ‘Believe It’, John Coltrane, ‘Crescent’ & ‘Interstellar Space’, Charles Mingus, ‘Mingus, Mingus, Mingus, Mingus, Mingus’, Herbie Hancock, ‘Head Hunters’ & ‘Thrust’, and Chick Correa, ‘Now He Sings, Now He Sobs’, are all records that have had a massive impact on us as both individuals and as a band, created by some of the most influential and pioneering legends in the vast world of music.

Let’s talk about art a bit. Your attention to aesthetics is admirable, especially when it comes to your outifts but I know they appeared after your second effort Abyssal Gods. How come? Also, since there is a large Langian and Art Deco shadow looming over you, I wonder what other movie directors and art periods fascinate you. Oh, and I have to ask, could you tell us if there are any ideas flowing for a new record?

Imperial Triumphant: Our outfits are the evolution of the band’s ideas, material, and points of interest. Focusing more on the esoteric, they reflect the grand design aesthetic of ancient Egypt, Art Deco, etc..  Surely they will keep evolving just as New York City is constantly transforming.

There are many great filmmakers and movies  that influence us. Kubrick is a mighty force of darkness in the broadest sense, painting with a super wide perspective, and the highest level of style. ‘2001’ and ‘Eyes Wide Shut’, are absolute masterpieces. Ingmar Bergman’s work, with his sinister view of humanity. Tarkovsky’s sadness and supernatural Soviet era cinema. For us, ‘Taxi Driver’ is as New York as it gets, both in its cinematography and overall philosophy.  And, yes! We have new material in the works that are building upon the creative pathway we have laid for ourselves, but will ultimately be something entirely new unto itself.

As a Slav, I was pleasantly surprised hearing Russian on “Chernobyl Blues” and Yoshiko Ohara once again lending her vocal talent on said track. What’s the story behind the Russian section and when did your collaborations with Ohara start?

Imperial Triumphant: We have been collaborating with Ohara since the Abyssal Gods era. She’s a tremendous addition to our records. Chernobyl Blues is the band’s 2nd take in the studio. It’s an exploration of the blues song writing forms with the Chernobyl meltdown as the atmospheric vehicle.

I want to ask you about modern music trends if you wish. Despite the immense popularity of streaming services, vinyl and cassettes are making a comeback. Are you happy about that and what are your stances on streaming services? Do you think it’s the future of music consumption because I am seeing some resistance by other artists and people.

Imperial Triumphant: Music is music and it’s up to every band to figure out how to make money with it. Bach and other notable composers, were paid by the church or aristocracy to compose. The Music Business has always been a hustle and we focus a lot on building a brand that offers exclusive physical goods that cannot be “streamed”, as selling records has become more and more difficult to do, due to said changes in the technology and how society engages with it.

Last question, I always ask this. Are there any metal or (even better) non-metal artists you’ve been enjoying recently and if so, could you give them a shout-out here? Thank you for taking the time to answer these questions and I look forward seeing you in the flesh. Cheers!

This list could be very long so to keep it short we’ll keep it modern. Look to Malthusian, Portal and Funeral Mist for forward thinking metal.