What nicer thing can happen in the music scene than one of the best active live bands supporting a society doing good in the fight against leukemia? This was happening on April 6, 2019 near Paris/France in a cosy small town, when LEPROUS were going to perform a very unique gig for HEART SOUND festival, accompanied by 6 other memorable bands.

The club “Espace Jean-Marie Poirier”, that can take up to 900 visitors, is located quite nice within a park. As the sun was shining generously that day, it wasn’t a problem that the doors didn’t open at 3 p.m. as planned. Technical problems inside caused a delay of two hours that casted a shadow on the event. This was very unfortunate, because all people working for this festival, do their job voluntary in their sparetime, and this was the last thing this event would have deserved. But what can you do when the techniques go on strike? As a result of this, the festival started at 5 p.m., almost all bands had to cut the stage time of their sets, and the bands kept on playing until 1 a.m. next day (instead of 11:30 p.m., as planned).

For the French visitors there were 4 bands from their homeland (our readers might forgive our magazine for not knowing many of them before, therefore not being able to point out to special things happening during their gigs, but just letting a general impression find place into this report) and 3 Scandinavian bands completed the line-up.

The opening act was called PROMETHEAN, a symphonic death metal band from Paris. They started their gig in the very second when the venue was opened for the visitors, using every second of their playing time to the fullest. Their fans didn’t let them down, they needed no warming up time and headbanged along immediately. Heavy guitar riffing and a very passionated vocalist left a big impression. 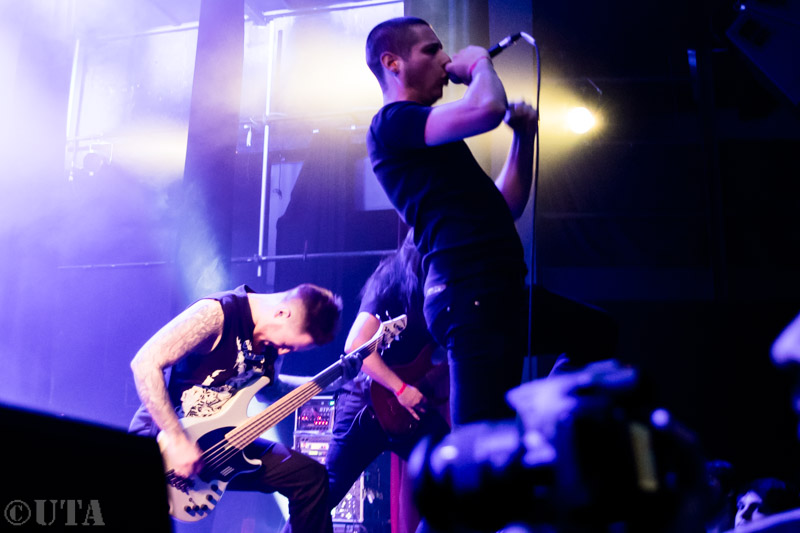 Next up were STÖMB, a djent band from France who gained some success within the past and are actually known outside France (which might be because they already played big festivals such as Euroblast or UK Tech Fest). They didn’t hesitate and immediately took the stage, opening with some midtempo neckbreakers that made the audience headbanging, really heating up the mood. But within all this some catchy melody tunes and effective moody post-rock attitudes were showcased as well. Within this short time they were able to create an electrifying atmosphere. God job! 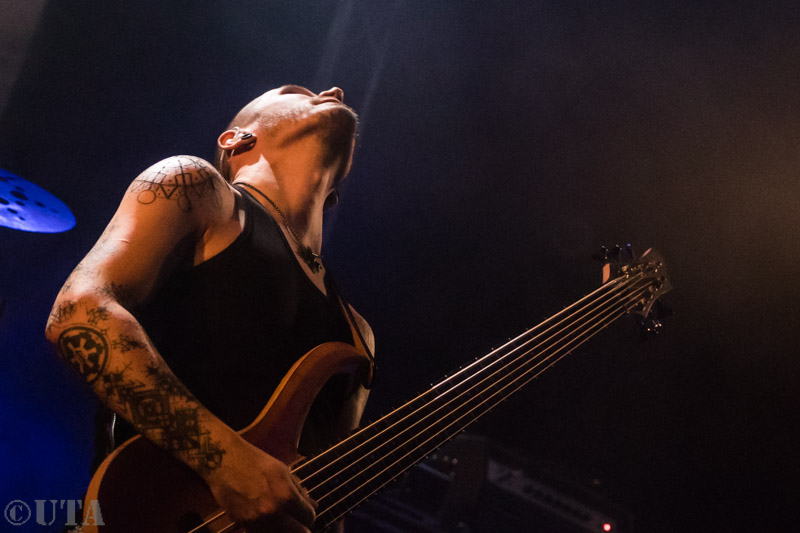 THE DALI THUNDERING CONCEPT closed the first circle of French djent bands for this evening. Their music actually is a bit more brutal and contains many deathcore elements. And one thing is for sure: they know how to make an audience jump and mosh. They were pretty wild and one could say  – with a wink- they almost practised an exhausting sports programme on stage. For sure they are very entertaining and kept the good mood up on an energetic level. 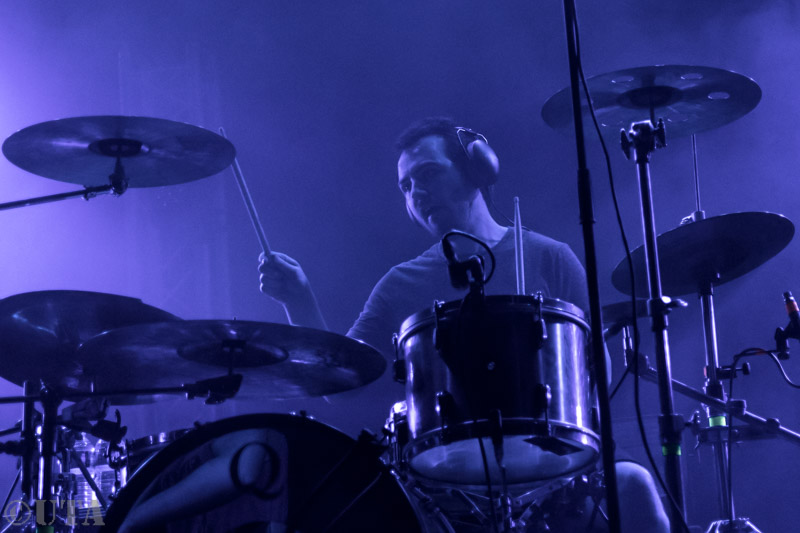 Now it was time for the first international band: VOLA, Danish- Swedish wicked quartet. These guys really took their time for a meticulous sound check before unleashing the most elegant hell, opening with the first single they released of their latest album “Applause Of A Distant Crowd”. “Smartfriend” kicked off the show in a seriously heavy matter. Drummer Adam Janzi gave the best example on ghost noting, and frontman Asger Mygind set the stage on fire with the sickest guitar tone and dynamic singing. The gig continued with a song from their debut album “Inmazes”, the djenty-catchy “Starburn”. Anyone who’s ever listened to VOLA at least once, can not deny the extremely catchy choruses these guys pull off, even though the music tends to be very heavy, always hinting Meshuggah. 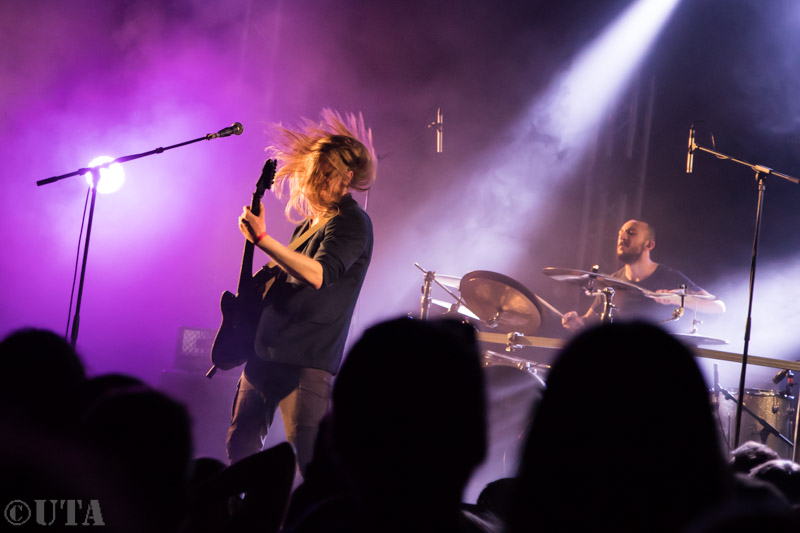 The gig slowed down a little after that, but the catchiness bar was raised anyway. “Ghosts” of their latest material stands out as a very dreamy rock hit, flowing on the audience like sea waves. Hereafter things got heavier again with “Your Mind Is A Helpless Dreamer”, many couldn’t resist but had headbang to the grooviest of breakdowns, keyboard player Martin Werner showing he means serious business with intriguing and extremely tasteful plays of electronica sounds. “Alien Shivers” and “Ruby Pool” were to follow. VOLA’s frontman delivered a surprisingly emotional guitar solo in a very David Gilmour-ish manner. After these soft rock songs, out of nowhere hit the heavy riffs of “Whaler”, bassist Nicolai Mogensen stealing the show with the grooviest of bass plays. The set ended with their most popular of hits, “Stray the Skies”, to which the audience sang along loudly and passionately. “That’s right!” Asger Mygind shouted after the fans succesfully sang the first verse of the chorus.

VOLA’s live shows are no dull affair,the obvious and numerous influences in their music dance in an incredible accordance with each other. Pink Floyd, Meshuggah, Massive Attack, Soilwork, Opeth are few of the many influences VOLA beautifully remind of, but in a very sophisticated and original way, and for those who are in the least familiar with their music, seeing how tight their performances are is just priceless. 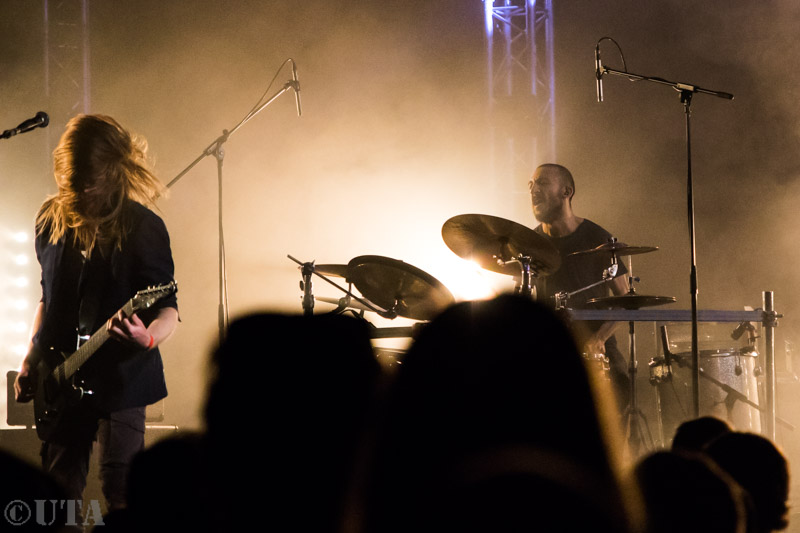 Now it was time for a speech from the founders of the festival and all the people around the benefiting association of Heart Sound and the organisation they donate all incomes to:

“Ensemble contre les Leucémies”, a local nonprofit organization fighting leukaemia created in 1998. Unfortunately, also this speech was cutted to a minimum due to the timely delay. But for sure everyone anyway was aware of all the good they are doing there. And apart from this, within the venue there were many volunteers providing information on the subject around the clock.

After that the last French band of this evening entered the stage and the visitors from other countries were about to learn what Rapcore is. SMASH HIT COMBO introduced their bastard made from hardcore, nu metal, deathcore, djent and hip hop. And it’s not possible to express it any other way: those guys are freaken sick and just know how to make the audience wild. With two vocalists they rolled over the audience like a demolition ball. There were double rap vocals, brutal guitar riffing, insane clanking and merciless roaring. At some point one of their vocalists just jumped into the fan crowd and started the wildest circle pit of the evening, being right in its core himself. Therefore, dear festival organizers outside of France: if you need another band that knows how to get the crowd heated up from 0 to 100 in 5 seconds, consider SMASH HIT COMBO! 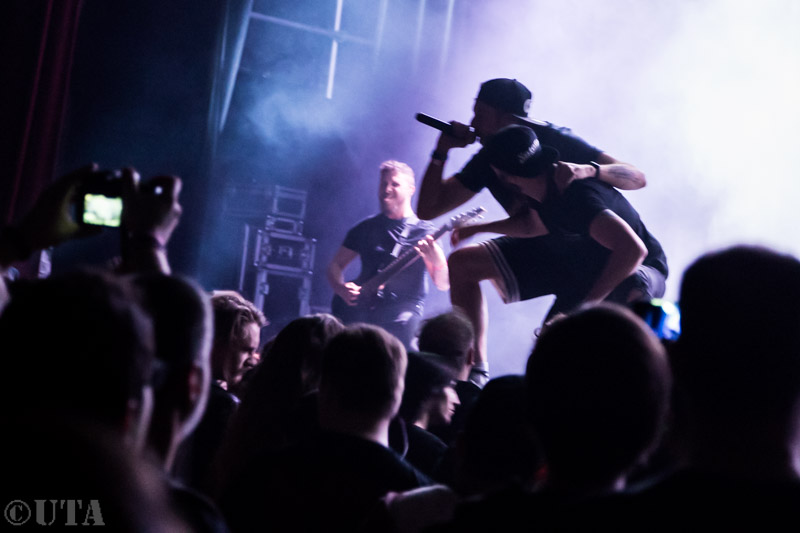 For the first time the Swedes from HUMANITY’S LAST BREATH played in/near Paris. The experienced technical deathcore players had to make a sacrifice concerning their playing time, just like the other bands. Usually they were supposed to have 1:20 hour including stage reconstruction, line check etc., but now they had less than one hour for everything. But they were professional and made the best out of it. A good band is able to please their audience also within a short stage time. So did HUMANITY’S LAST BREATH and it was acknowledged with a packed hall and many enthusiastic headbangers. Deep-pitched growling and brute guitar riffing created an atmosphere of adamant obscurity. Quite certainly their fans will remember this gig for a long time. 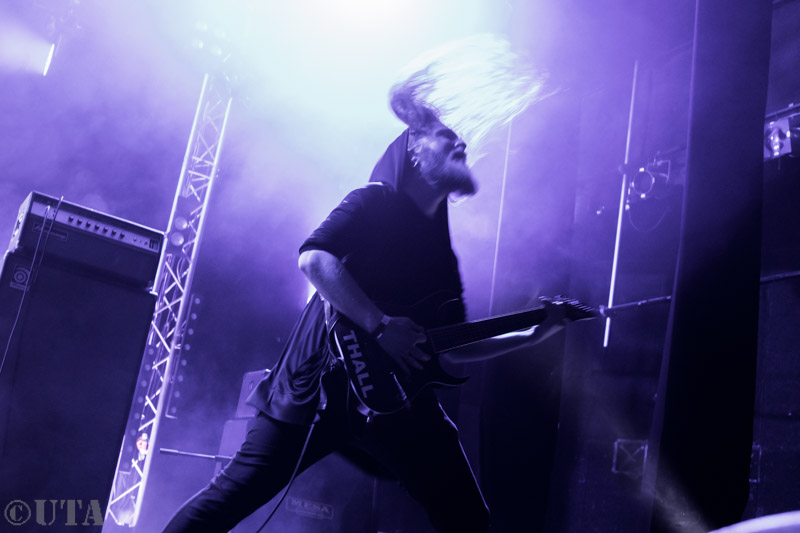 At 11:30 p.m. finally Norway’s LEPROUS started their eagerly awaited gig. They played a special “shuffle show”, putting 33 of their song titles (regarding songs they are able to play live properly) written on paper in a hat, letting audience, band and crew members pull out track by track, playing it right there in the line the songs got pulled from the box. What an awesome idea, driving their fans insane!

The applause was overwhelming, when LEPROUS finally entered the stage with the “shuffle hat”. Of course the boss of “Ensemble contre les Leucémies”, Roland Rab, had the honour to pull the first song which was “Rewind”. The crowd went wild instantly. Of course this shuffle way of playing demanded some extra seconds of preparation before each song, so the band members could tune their guitars accordingly and all kinds of technical stuff. But this absolutely had no influence on the mood in the crowd, because the anticipation among the fans, which song might be played next, was tremendous (yeah, the band members didn’t necessarily announce the song title upfront, but just started playing). The second song was taken from the hat by a lady in the audience. It was actually “Lower”. One of the saddest songs right on second place in the setlist should be new for Leprous as well, and frontman Einar Solberg immediately stated that they will never again play the “Rewind-Lower” combination.  😉 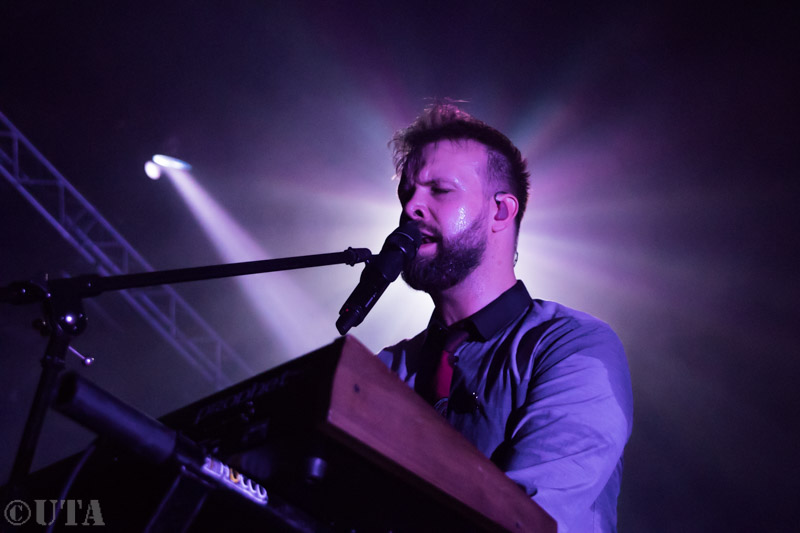 After that also band members started pulling songs from the hat. A very special version of “Acquired Taste” was to follow. Vocalist Einar Solberg, whose voice seemed to be in very good condition that day, changed the record version into a more freestyle version with a very touching, emotive second part of the song that made some fans in the audience cry. “Bonneville”, “Triumphant” and “Captive” were to follow, before a row of 3 of their most stirring, sentiment songs was about to enrapture those fans who love the more intimate songs: “Echo”, “Salt” and “Down”. These were deeply-moving moments for some fans, as it’s very unlikely that this combination would have been played in a “normal” gig. 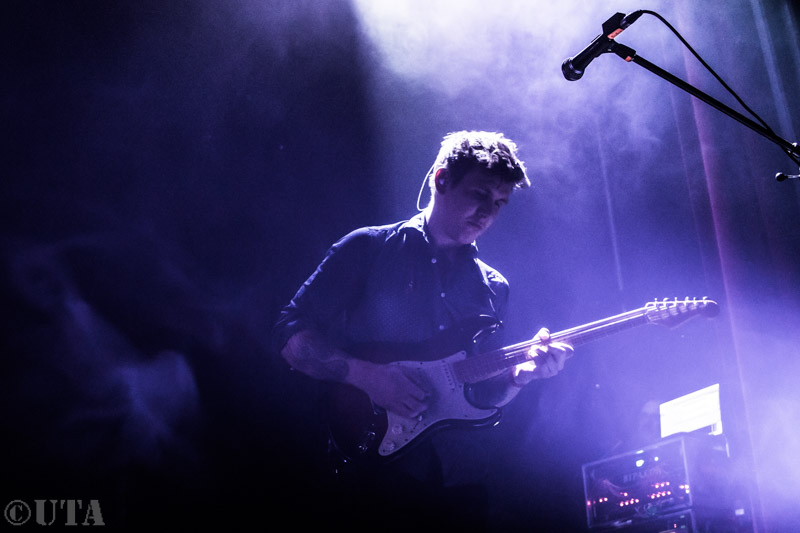 Frontman Einar Solberg didn’t get tired of complaining about so many slow songs in a row, of course all with a sly smile and tongue-in-cheek. He was the one who had to entertain the crowd in between the songs, while the other musicians would prepare, tune etc. And although he has a talent for it, he pointed out he’d rather not like to be “that guy”. 😉

“Down” was actually supposed to be the final song, but of course the French (and partly international) audience didn’t stop shouting for encores until the band returned. Front of House, Chris, had the honour to pull the last song from the shuffle hat. Thus an ardent performance of “The Price” finished this awesome, unique gig full of many joyful moments and a high class instrumental and vocal performance that’s searching for its equals. 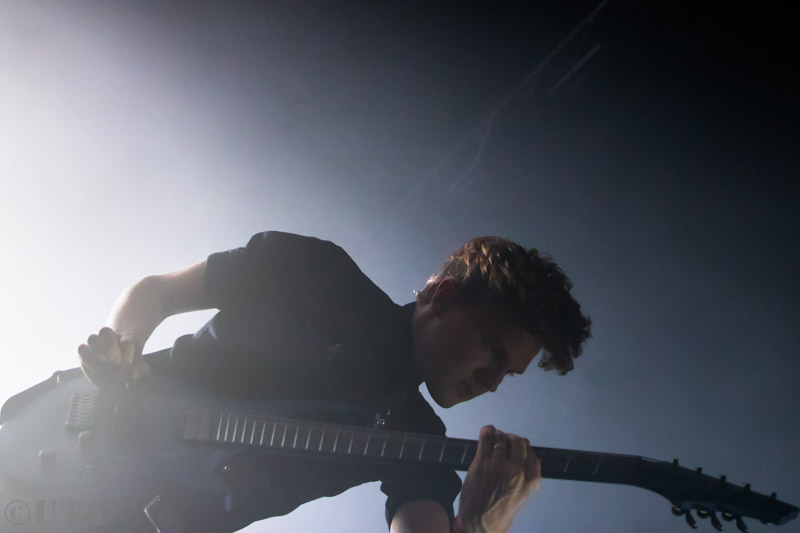 We want to thank Heart Sound for this incredible experience, wishing them all the best for the future.